Kyphosis, an Exaggerated Curvature of the Spinal Column

Kyphosis is an exaggerated forward rounding of the thoracic, or upper back region of the spine. This condition is also called thoracic kyphosis, or round back or hunchback, though the characteristic hump may not be noticeable in mild cases. In pronounced cases kyphosis can cause pain, difficulties in breathing and digestion, cardiovascular and neurological problems, and can shorten lifespan in severe cases. Kyphosis can develop at any age and result from developmental problems, disease, trauma or degenerative disease such as arthritis. 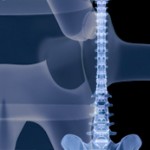 At New Jersey Spine Specialists, we provide a variety of treatments for spine conditions. Our doctors are specially trained in treating all spine conditions with care and precision.

Defining and Dealing with Kyphosis

Kyphosis occurs in several forms. Postural kyphosis is more common in girls, and is usually caused by slouching or poor posture, which can stretch spinal ligaments and result in abnormal spinal development. The body often develops an exaggerated inward curve, or hyperlordosis of the lower spine to compensate for the outward curve of the upper spine caused by kyphosis. Scheuermann’s kyphosis occurs mostly in adolescents and is more common in boys. The vertebrae, or bones of the spine grow abnormally, developing a wedge-shape instead of the normal rectangular form. The cause of Scheuermann’s kyphosis is unknown, but genetics is believed to play a role as it often runs in families. This form of kyphosis may be accompanied by scoliosis, a sideways curvature of the spine. Congenital kyphosis arises during fetal development. Spinal bones may be fused or develop abnormally, and the condition may worsen as the child grows.

In adults, causes of kyphosis include osteoporosis, degenerative or inflammatory arthritis of the spine, cancer, or benign tumors that impinge on the spinal column. Recommended treatments for kyphosis depend on the form and severity of the condition. Exercises for kyphosis designed to strengthen back muscles, and sleeping on a firm bed may alleviate symptoms of mild kyphosis, while anti-inflammatory medications may help relieve pain. In severe cases bracing and even surgery for kyphosis are treatment options. The New Jersey Spine Specialists treat kyphosis using the most modern procedures at our offices in Montclair and Summit. If you live in Warren, Bloomfield, Short Hills or anywhere in Middlesex or Essex Counties or in the northern New Jersey region, and want to know more about kyphosis or other spinal conditions, call or email us today to schedule an appointment with board certified orthopedic spine surgeons near you.