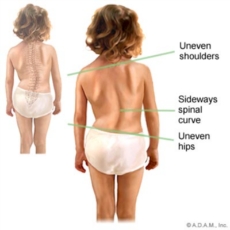 Scoliosis is an abnormal lateral, or side-to-side curvature of the spine. The curve may be in the form or a single bend, like the letter “C,” or an S-shaped curve. Scoliosis can occur at any age, and among the sub-classifications used to describe the condition are age of onset: infantile, juvenile, adolescent, and adult scoliosis. So who develops scoliosis, and what puts someone at risk? In most cases the cause of scoliosis is unknown. The most common form, idiopathic scoliosis, responsible for about 65 percent of cases, can’t be explained; idiopathic is Greek for “of its own kind,” i.e., unknown cause. (Scoliosis is Greek for “bending.”)

About 15 percent of scoliosis cases are congenital, caused during fetal development for a variety of reasons. At least ten percent are believed to be multifactorial disorders, caused by a combination of influences including genetic and environmental factors.

Fortunately, the majority of scoliosis cases of mild; the curvature is small and does not progress. About ninety percent of individuals diagnosed with idiopathic scoliosis require no bracing or surgery. However, it can cause severe skeletal deformities that compromise health and mobility. Several signposts can indicate which scoliosis cases will progress and which will stabilize. The less developed the skeleton when the condition is first diagnosed, the more likely the scoliosis is to progress. In general, the younger the age of diagnosis, the greater the chance that the scoliosis will require treatment.

The location of the curve can also indicate the future course of the condition. Curves in the lower portion of the spine are less likely to intensify than curves in the upper back. The size of the curve during childhood is also an indicator of future progression; the larger the curve, the more likely the curvature will increase. Additionally, C-shaped curves are less likely to result in medical complications than S-shaped curves.

So benign is the condition in the main that many people have mild scoliosis without being aware of it. Signposts include uneven hips, waist or shoulders, a rib cage higher on one side than the other shoulder blades of uneven prominence.